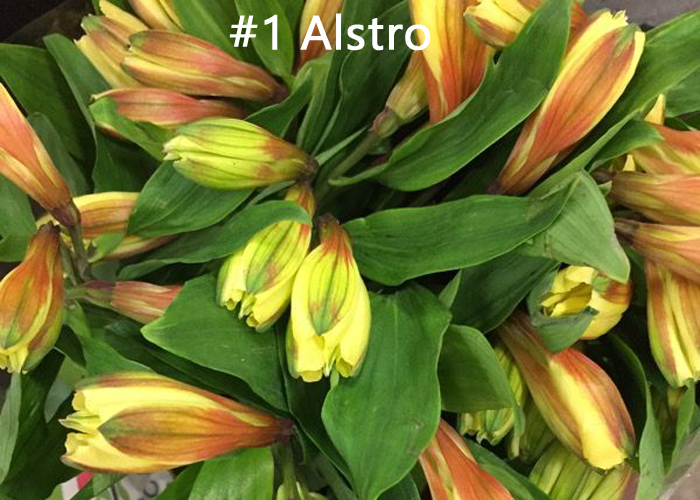 Alstroemeria is a Peruvian Lily named after the Swedish botanist Baron Klas von Alstroemer. This South American flower's seeds were among many collected by von Alstroemer on a trip to Spain in 1753. Alstoemeria comes in many colors, is long lasting and fills out a bouquet beautifully. 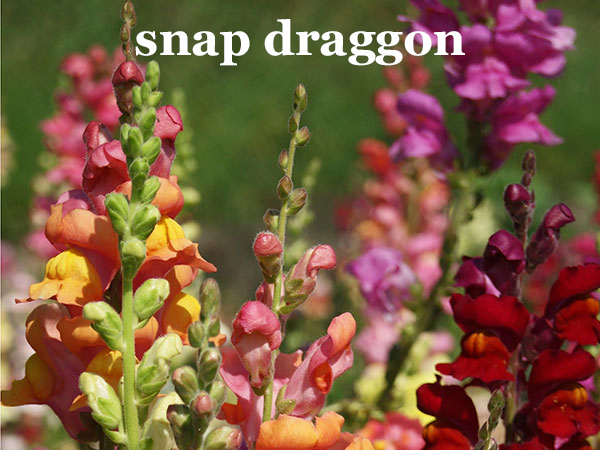 While snapdragons were common in the earliest gardens, their actual origin is not known. Some botanists believe they originally grew wild in Spain and Italy. The snapdragon's botanical name, antirrhinum, is derived from the Greek anti (like) and rhin (nose), in reference to the flower's snout-like shape.

In the British countryside, children too young or timid to capture frogs or other small creatures once made "pets" out of the snapdragon flower. A child would gently squeeze the sides of the flower to open and close the "dragon's" mouth, complete with a lashing tongue.

The lily's name has pre-classical origins; indeed it was the Greek name leirion and the Roman name lilium from which the name "lily" was derived.

In Christian symbolism the lily represents purity, chastity, and innocence. White lily bouquets are especially popular in Christian homes during the Easter holiday, for they symbolize Christ's resurrection.

Legend tells that the lily sprang from Eve's tears, when upon being expelled from Eden she learned she was pregnant. Other folklore tells of lilies, unplanted by any human hand spontaneously appearing on the graves of people executed for crimes they did not commit. Some believe that planting lilies in a garden will protect the garden from ghosts and evil spirits.

In China, the day lily is the emblem for motherhood. To dream of lilies in spring foretells marriage, happiness and prosperity; to dream of them in winter indicates frustration of hopes, and the premature death of a loved one. The Romans were said to cure corns with the juice from lily bulbs. In ancient Greek and Roman marriage ceremonies, lilies, symbols of purity and innocence, along with wheat, the symbol of fertility, were placed on the bride's crown. Long ago, Spaniards believed that eating a lily's petals would restore someone who had been transformed into a beast back into human form. In medieval times, lilies symbolized feminine sexuality.

On the whole, lilies imply purity of the heart. While lilies come in a variety of colors, most people readily associate lilies with white, meaning innocence and sweetness. The white Madonna lily is considered the special flower of the Holy Virgin, for Christian lore tells that the lily had been yellow until the day the Virgin Mary stooped to pick it. Yellow lilies express gratitude and gaiety. 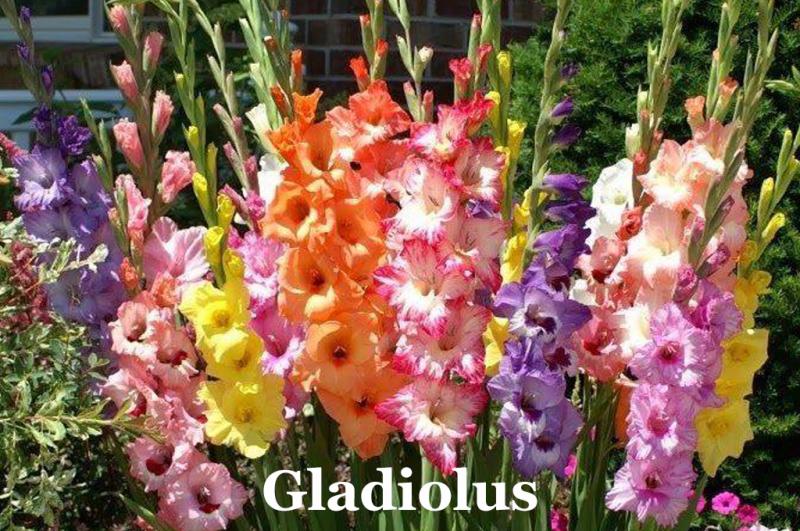 The name "gladiolus" is derived from the Latin word gladius, meaning "sword," for the shape of its leaves. An ancient name for the gladiolus was "xiphium," from the Greek word xiphos, also meaning sword. African gladioli were imported in large quantities to Europe from South Africa during the 18th century.

The gladiolus flower is the birth flower for August; it also represented the Roman gladiators. Before the African gladioli became popular in the West, the Mediterranean and British gladiolus flowers were used to treat physical ailments. The English used the gladiolus flower's stem base (corms) as a poultice and for drawing out thorns and splinters; powdered corms mixed with goat's milk was commonly used to soothe the symptoms of colic.

The gladiolus flower signifies remembrance. It also expresses infatuation, telling the receiver that he or she "pierces the heart." 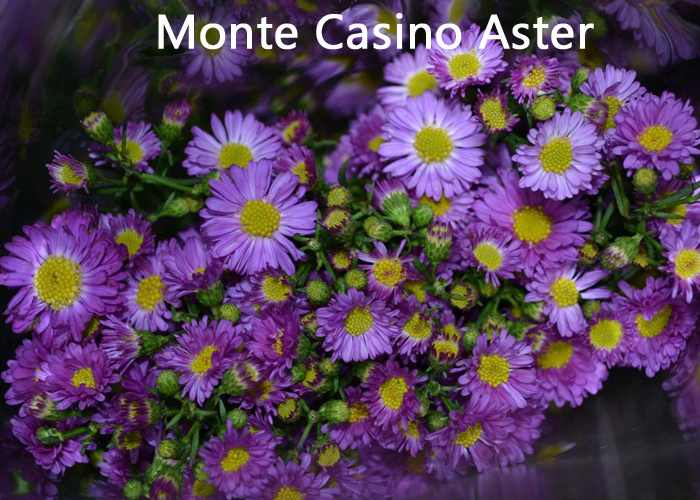 The English called asters both "asters" and "starworts". Aster, Latin for "star," referred to the flower's star-like shape, while wortmeant "root," which then applied to plants with healing properties. There are over 600 species of aster, the most popular being the Monte Casino.

Asters convey an afterthought or variety, except in China, where they signify fidelity. 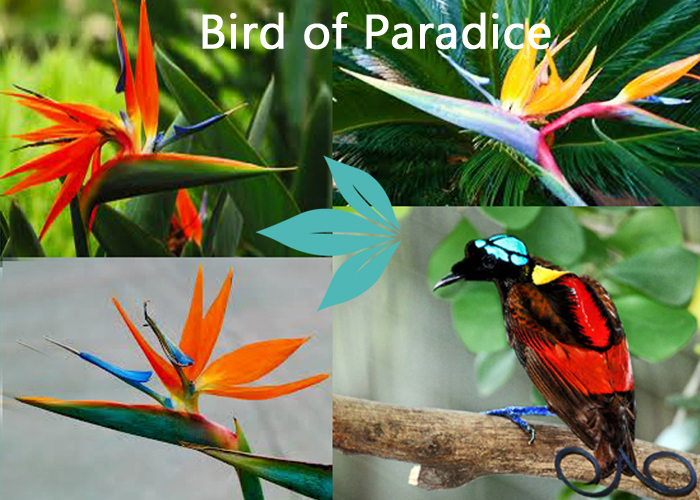 Botanists are divided on how this remarkable flower got its name. Some maintain that the flower's brilliant orange and blue blossom, which resembles a bird in flight, is named after the bird of paradise itself — one of the most beautiful bird species in the world. However, since this flower is also known as the strelitzia, some believe that it was named after England's Queen Charlotte, who was born Charlotte Mecklenber-Strelitz. 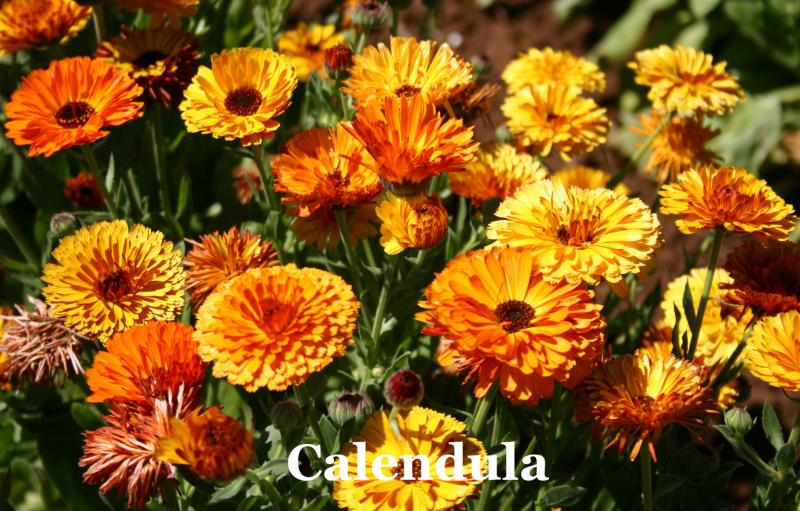 A member of the marigold family, calendula was valued historically for its medicinal and culinary uses. An ancient beverage made from a mixture of calendula blossoms in wine was said to soothe indigestion. Calendula petals were used in ointments that cured skin irritations, jaundice, sore eyes, and toothaches. The Romans used calendula mixed with vinegar to season their meat and salad dishes.

Since the calendula's flower head follows the sun, it is sometimes called "summer's bride" or "husbandman's dial." The calendula flower means "winning grace" in the language of flowers. 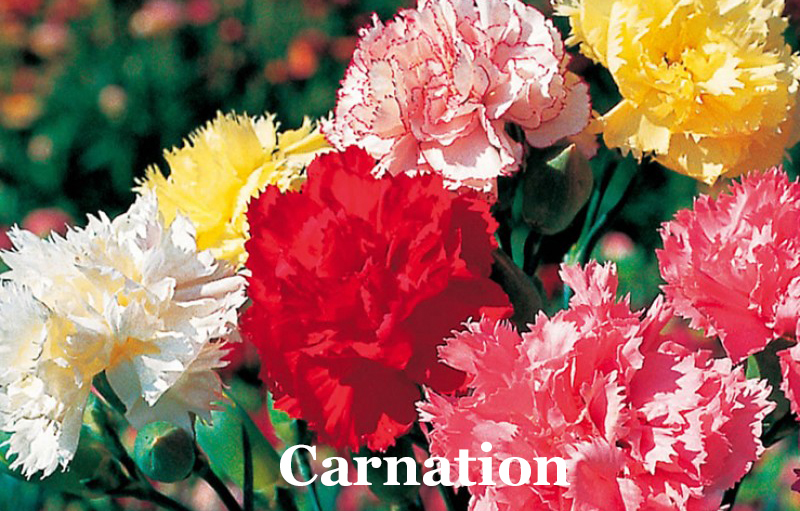 The carnation — originally called dianthus by the Greek botanist Theopharastus — is native to the Near East and has been cultivated for the last 2,000 years. Some scholars believe that the name "carnation" comes from "coronation" or "corone" (flower garlands), as it was one of the flowers used in Greek ceremonial crowns. Others think the name stems from the Greek carnis (flesh), which refers to the original color of the flower, or incarnacyon (incarnation), which refers to the incarnation of God made flesh. 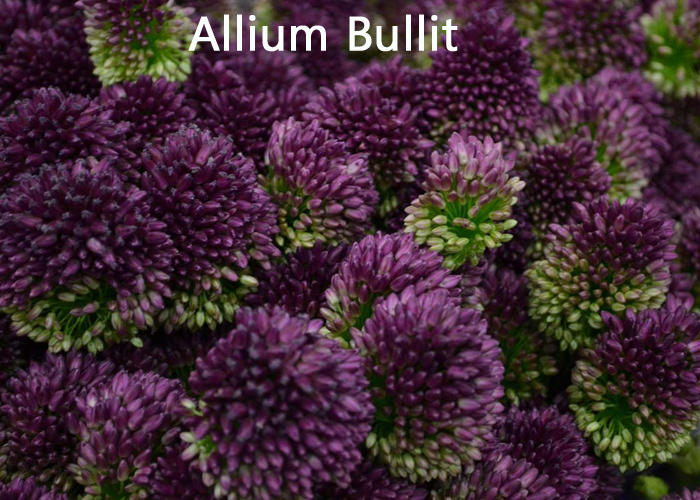 Large group of ornamental and edible bulbs and flowers that has been valued and vilified alternately over the centuries. Notable members of the family include the large ornamental Giant Alliums (A. giganteum) and the diminutive but delicious Garlic.

Most varieties will exude the odor associated with onions if handled brusquely, so treat with care. Inspect allium flowers upon arrival, taking particular care to look closely at the tiny flowers that compose the flower head. Make sure that all are alive, and not turning brown or black. Check also that the stems are neither slimy yellowing or cracked. Stems should be cut and the flowers hydrated in a low sugar holding solution. These flowers should preferably be processed in the cooler, as they are generally spring crops.