Unique flower emblems represent the Canadian provinces and territories. These symbols represent the sovereignty and the various provincial identities. They express the different features of a province or territory. The provincial floral symbols account for the flowers that grow in that area. Get to know Canada below. 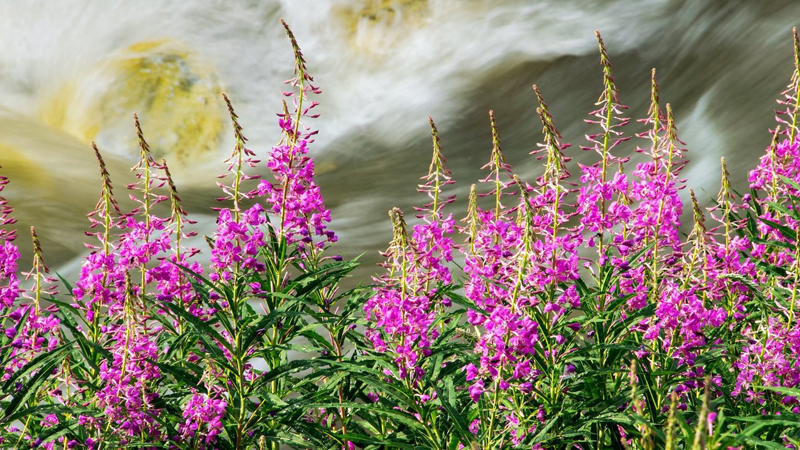 The Fireweed (Epilobium angustifolium) flower got its name because it is the first plant to grow abundantly in areas struck by forest fire. Plants like this are called “pioneer species” because they grow in land that has been disturbed. After trees regrow to shade the area, the Fireweed no longer gets enough sun, but its seeds stay in the ground. When another forest fire passes through, the seeds germinate, and the Fireweed flower grows and blooms once again.

Fireweed is the official flower symbol of Yukon, Canada chosen in 1957.

It grows along Yukon roadsides, river bars and clearings from mid-July to September. Some parts of Canada recognize the fireweed as the Great Willow Herb. The fireweed has a reddish stem that rises to a height of about 2.5 m and has leaves that are scattered and spirally arranged. The flower is edible. The fleshy part inside the young stems of the Fireweed is delicious, and its leaves can be made into an infusion rich in vitamins A and C. Bees adore Fireweed flowers and produce a liquid gold Fireweed honey.

The Mountain Avens (Dryas octopetala), was adopted in 1957. The creamy-white flower, which is a member of the rose family, grows in the Eastern and Central Arctic on high, barren rocky ground. It has narrow basal leaves and supports a single bloom on a short stem. This flower is an Arctic-alpine flowering evergreen subshrub in Rosacea family. The name octapetala comes from its eight petals that are a unique feature from the rest of the Rosacea family. The Dryas octopetala is diverse in the mountainous regions dominating the Arctic regions, the Scandinavia mountainous region, and the Canadian Rockies. The Northwest Territories of Canada recognizes the Dryas octopetala as its official floral emblem. 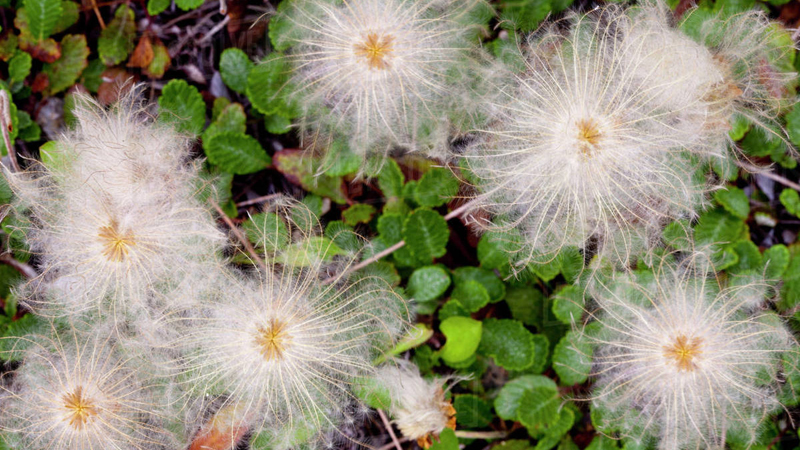 Apart from being from the rose family the Mountain Avens Flower will seed a blossom like puff of cloud, ready to be blown and spread by the wind. See above. 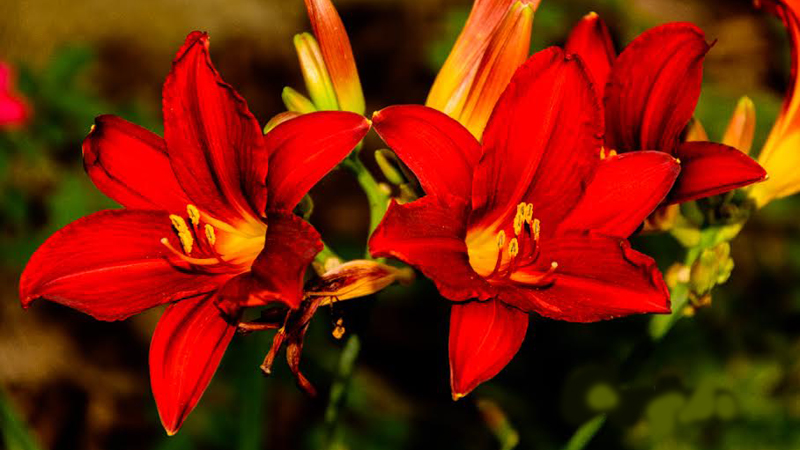 Western Red Lily (Lilium philadelphicum), was chosen in 1941. It is also known as the wood lily, Philadelphia lily, Prairie lily or Western Red lily, and it is a perennial species of lily native to North America. Native Americans relied on the wood lily bulb as a source of food. Used as a substitute for potato and a thickener for soups, its sweet flavor and high starch content added flavor and nutrition. As a medicinal plant, wood lily bulbs are steeped in tea as an herbal remedy for coughs, fever and stomach ailments. Crushed wood lily bulbs made into a poultice are thought to bring relief to swellings, bruises, sores and wounds and has been used as a remedy for spider bites. 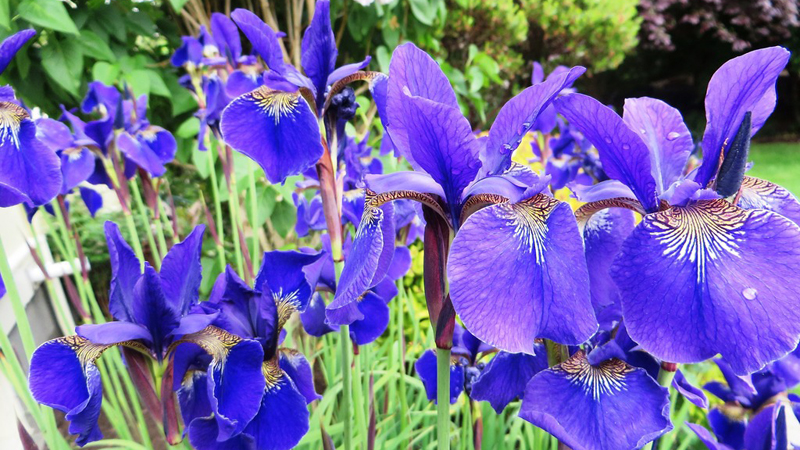 The blue flag (iris versicolor) is the floral emblem of Quebec, as per the Flag and Emblems of Quebec Act November 5, 1999. Scientifically known as the Iris versicolor is native to North America and diverse in Eastern Canada and the Eastern United States. The Iris stems from a plant which Native Americans used to make medicine specifically from the underground stem (rhizome). The blue flag was used as a laxative and to relieve fluid retention and bloating. It was also used to treat swelling (inflammation) and skin conditions; and to prevent vomiting. Some people use it for liver problems and to increase bile production. But we don’t recommend experimenting.

The Lady's Slipper (Cypripedium) was made the official provincial flower on April 25, 1947. The orchid gets its name from the shape of its petals which look like a slipper. The Lady's Slipper blooms in late May and June and grows in shady woodlands. These delicate flowers should not be picked or moved because they rarely survive a change of habitat. The pink lady’s slipper is an orchid from the genus Cypripedium. The lady’s slipper is diverse in Canada, as it inhabits every province except British Columbia. The lady’s slipper plant has two leaves that are close to the ground and a stalk that sprouts to hold a single pink flower. Prince Edward Island in Canada uses the pink lady’s slipper as the official flower symbol.

White trillium (Trillium grandiflorum,) flowers Apr-May in the hardwood forests of western and central Québec and in the lower Ottawa Valley, Ont. It has been the Provincial Floral Emblem in Ontario since 1937.Trillium grandiflorum is a species of flowering perennial herbaceous plant that is native to North America ranging from the northern Quebec to the south of the United States. In Canada, this plant is also diverse in British Columbia. The white trillium is famous for its three-petaled white flowers. The flower is the official provincial emblem of Ontario, Canada and is featured on the province’s official flag.

Purple Saxifrage. (Saxifraga oppositifolia) was unanimously adopted by the Legislative Assembly of Nunavut on May 1, 2000, as the official flower of Nunavut. This wildflower is one of the three wildflowers depicted on Nunavut's coat of arms, is a species of a low-growing edible plant found in the Arctic and high mountainous regions. The plant grows to about 3-5 cm and has woody branches that lie close to the ground. The plant flowers during the spring to the summer. It thrives in environments ranging from cold temperatures to arctic habitats. The purple saxifrage is the flower symbol of Nunavut, Canada.

The Mayflower (Trailing arbutus), is a shrub in the family Ericaceae. The Nova Scotia Colony is a member group of the Canadian Society of Mayflower Descendants, and membership is open to all who are interested in the Mayflower, its history and particularly the passengers who came on the boat in 1620 to New England. Its habitats range from Newfoundland to Kentucky. The plant does well in moist and acidic soil. The flowers of the Mayflower are pink and fade to almost white. In Canada, the Mayflower is the emblem of Nova Scotia.

Purple Pitcher Plant (Sarraceniaceae). In 1954 the Newfoundland Cabinet designated this interesting plant as the official flower of the province. The pitcher plant gets its nourishment from insects that are trapped and drown in a pool of water at the base of its tubular leaves. Its habitat ranges from the Eastern Seaboard and the Gulf Coast of the United States, all regions of Canada except Nunavut and Yukon, Alaska, and Washington State. The purple pitcher plant thrives in the cold temperate climates. Like all other carnivorous plants, the purple pitcher plant obtains its nutrients from prey capture. This species of the pitcher is the floral emblem of Newfoundland, Canada.

Purple Violet (Violaceae). The flower was adopted as the New Brunswick floral emblem in 1936, at the request of the provincial Women's Institute, the Lieutenant Governor and New Brunswick schoolchildren. The Purple Violet is the largest genus in the family Violaceae as it has species of somewhere in between 525-600. Most species of the Viola are widespread in the temperate Northern Hemisphere. Some species are perennial, others are annual, and a few are shrubs. The viola has heart-shaped leaves and flowers that rise from the ground. The colors of the viola flowers range from violet, to shades of blue, white, yellow, and cream. The purple violet is the national emblem of New Brunswick.

Prairie Crocus. In Manitoba, the prairie crocus (Pulsatilla ludoviciana) also known as anemone patens, the pasque-flower, the windflower (because of its furry petals) and the gosling plant This is a flowering plant from Ranunculaceae family This flower was officially adopted as the official flower in 1906 and is native to Canada, Europe, China, Mongolia, Russia, and the United States. The population of prairie crocus is reducing due to the interaction between the shortgrass prairie and the prairie crocus ecosystems. In the Canadian province of Manitoba province the Prairie Crocus is its official flower.

The scientific name of the wild rose is Rosa acicularis. Other names the flower is referred to include the prickly rose, prickly wild rose, bristly rose, and the Arctic rose. The Rosa acicularis is diverse in North America, Asia, and Europe. This plant is a deciduous shrub that grows to a height of about 1-3 m tall and has pinnate leaves. The wild rose has pink flowers and is the official provincial flower of Alberta province in Canada.