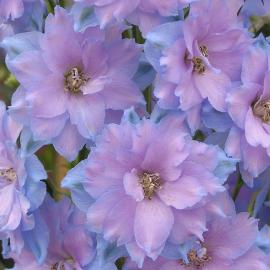 Although the ecliptic coordinate system is the foundation of the zodiac, modern people recognize only the twelve signs of the Zodiac with horoscopes. Horoscopes are the forecast of a person’s future by self-proclaimed fortune tellers. As horoscope mythology has evolved, some have embraced certain flowers as representing the character associated with the zodiac signs.

Often considered the most emotional of the zodiac signs, it’s not surprising to find a bunch of incurable romantics among those born under the sign of Cancer. Some say that the Cancer's personality can be boiled down to one word: sensitivity – and along with this comes a patient, sociable and loving disposition.

Let these generous spirits know how much you appreciate their compassion and thoughtfulness with a flower arrangement filled with delphinium – aptly named for their dolphin-shaped flowers (an appropriate match for this water sign). With symbolism tied to an open heart, ardent attachment and a feeling of lightness and levity, delphinium will appeal to the Cancer’s sensitivity and romanticism.